{Custom build/built by me, my dad, Tom, Tom, and the frame was given to me by another Tom}


ATTACHMENTS:{4 pics(minimal) of the kart from the 4 angles}(low front, high front corner, low side, and hi

Other angles of my kart

Some other angles, and some of these pictures are older, so it shows the state I went through before its finish.

My rebuild, not restored, Margay race kart. Bought as a "rolling chassis" and came with original Yamaha KT100 and wet clutch, will be rebuilding that....someday. It took me about five months to get her back on the pavement and runs great, in my opinion anyways. It was my very first time rebuilding a kart and modding a small engine. Had fun doing it and looking forward to rebuilding my next one.

bshinn said:
And as it sits now, BTW it's an 84 Margay Xpert-II according to Keith at Margay. It's been a 2 yr odyssey to this point, the plan for the winter is a final teardown frame mods, powder, & chrome, then it should be finished.

It just so happens that there are kids on this forum

Hybridyne said:
Got my two army mules completely done this weekend. One is all electric and the other has a Honda 125cc Motor with electric start and reverse.

Those are my new favorite! I've never seen anything like it. Did you design it?


Sent from my iPad using Tapatalk

I lifted the front end shock mounts 3" and put some longer shocks with softer springs for much better front end suspension setup (she floats nice now). 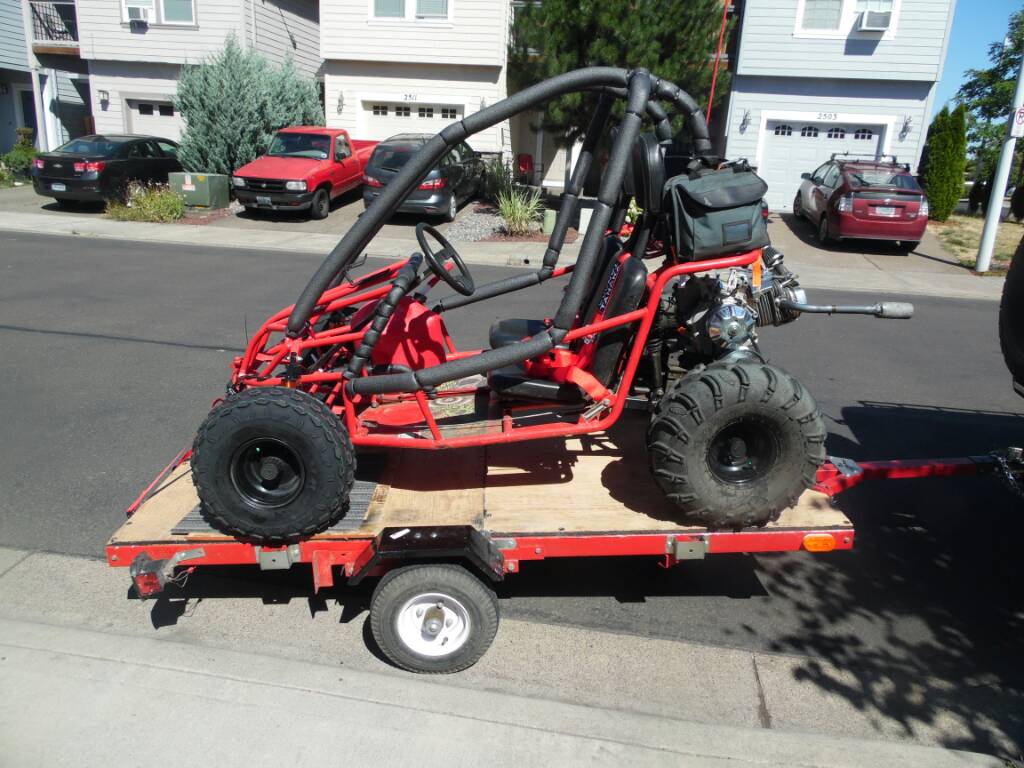 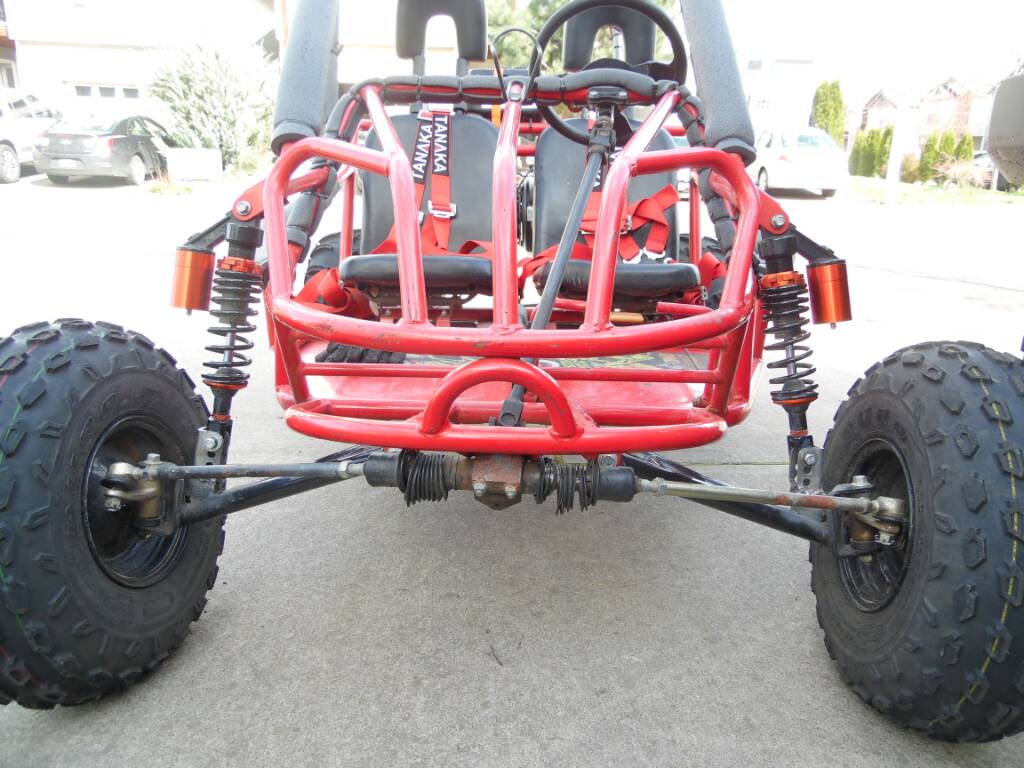 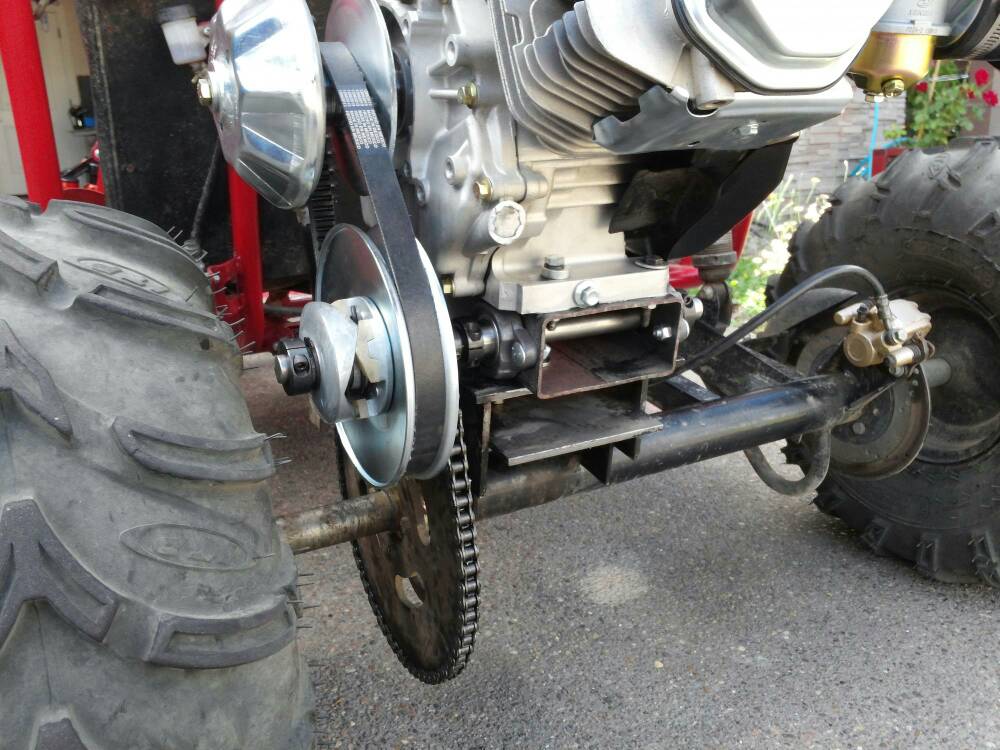 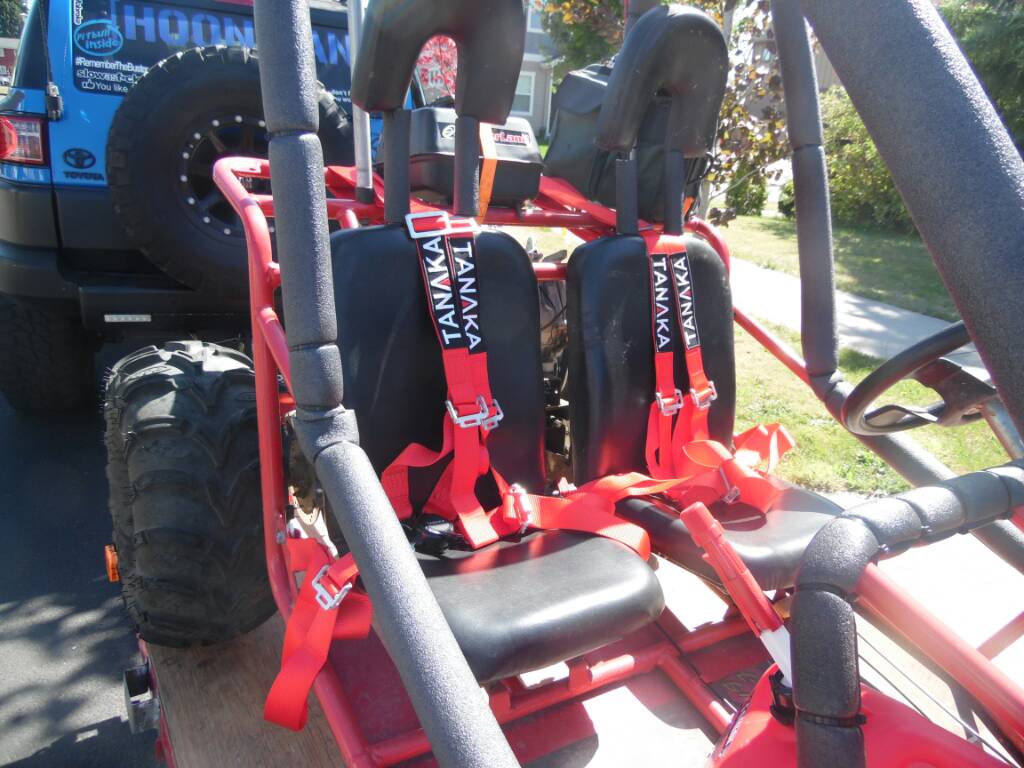 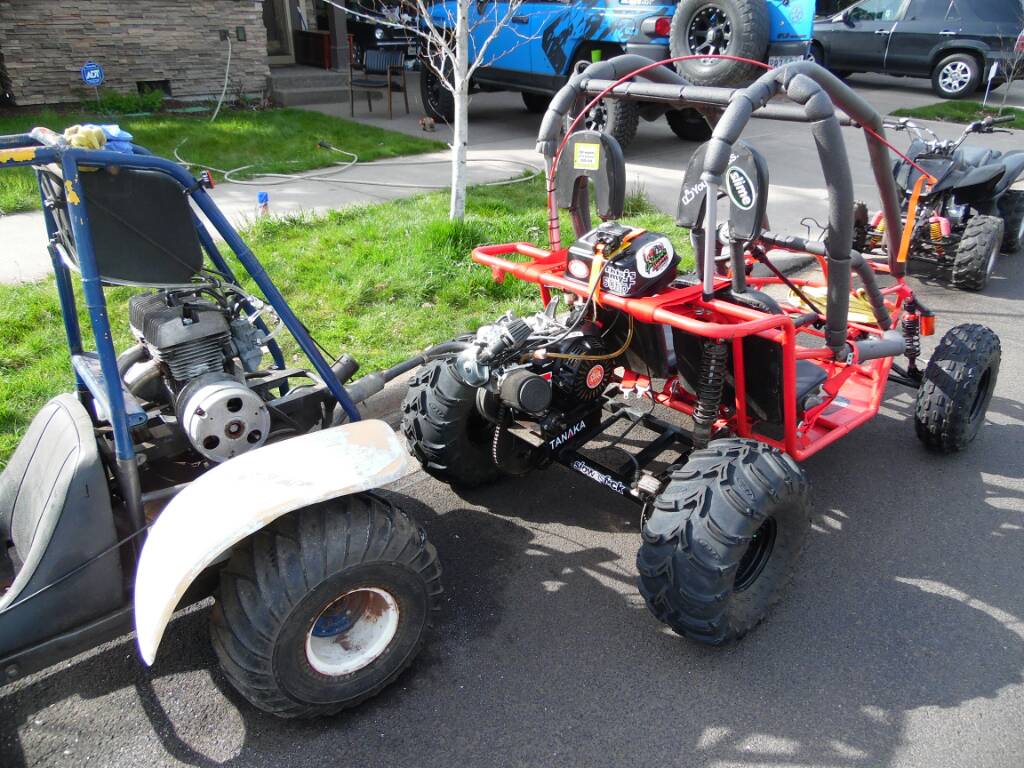 Sent from my SPH-L720T using Tapatalk

Tom Knight, Love the project turned out great! Did you build with a set of plans? I would really like to build one as well.

It started as a small Manco frame. I shortened everything so a 5yr old can fit on it.
3hp Briggs Flat head
12T clutch
80T sprocket
#35 chain
4.10x3.50-4 inch wheels in front
13x5-6 inch wheels in back
I used the seat, engine mount plate, steering column, and spindles from the original Go Kart. I shortened it up, and built a new frame for it. 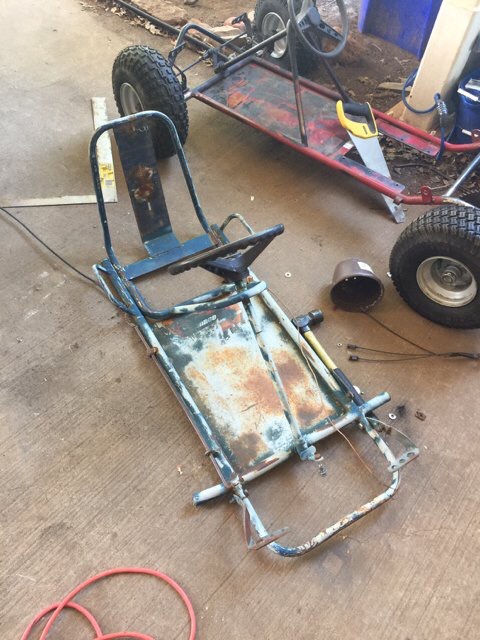 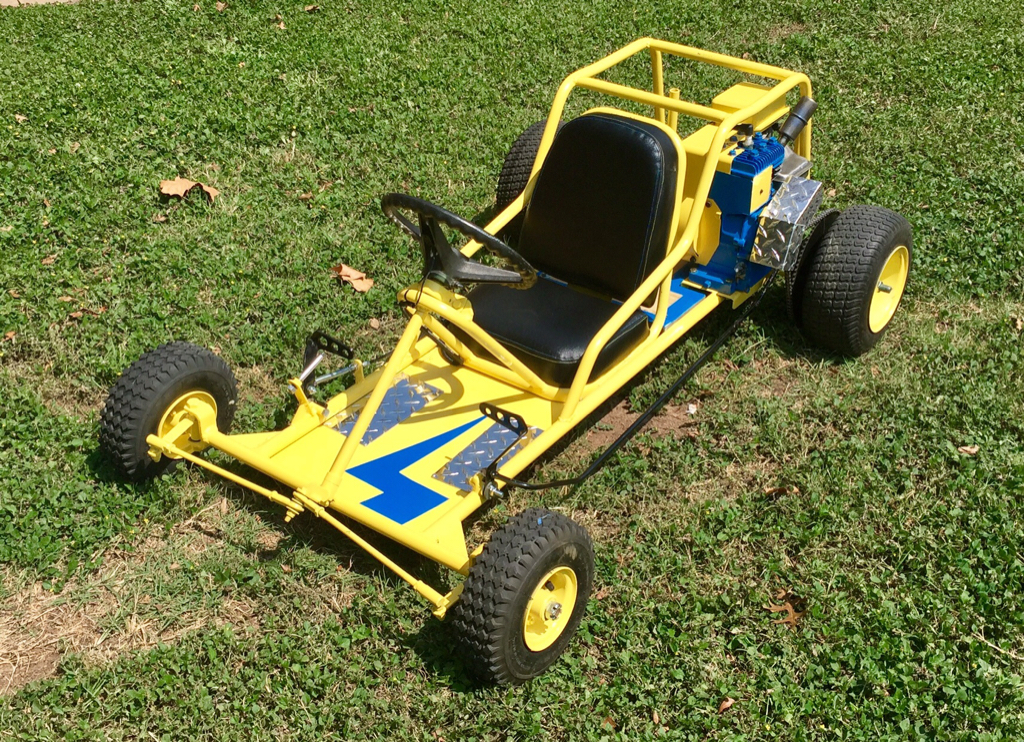 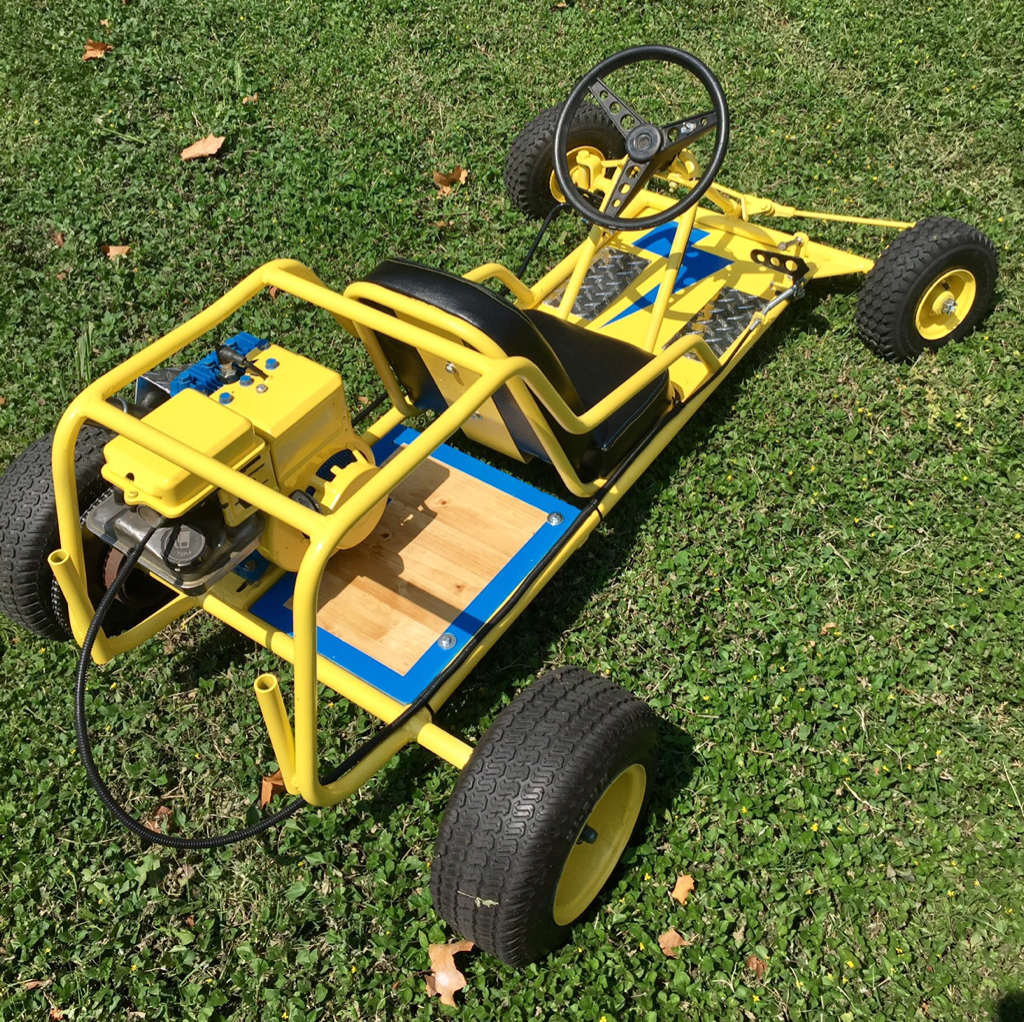 Sent from my iPhone using Tapatalk

I really liked everyone projects, mine chainsaw is in progress will be posting it soon.
D

Mike_D said:
Pics of my Clark Cyclops 440 restoration. My cart from early 1980s, spent countless hours and summers riding it. Restored so my son can ride it again (in a few years). Added the pipe behind the axle under engine plate and strengthened the joints on seat pan. All that's left is to get a new seat made.
Click to expand...

VERY COOL MIKE D! Passing it down to your son.
T

Manco 606 that sat in a field for 2 years. Rebuilt from frame up for my son, still a work in progress but it's a blast.

The junkyard dog (dingo) and the fox 2 mancos

I don't have photo logs of putting them together, but both were lacking engines, gearing had to be figured, no tires held air ect ect. Both were running and driving within 48 hours of getting them home. These two are what I'll be playing with while finishing a few other kart projects, I'll add the manco 400 I'm building for my nephews and niece soon, should be going within the next couple weeks.