My wife and I have to be out the door by 6am every day so she can be at work by 7am. In the next month, we'll have to leave earlier just because NDOT might he slow getting our half of I-80 cleared. But with how our jobs are going, we are looking to work close to home within our village. If we can make the same amount and not have to work that far from hom, it's a huge win for us.

My hours at work are erratic and not consistent. Some days I'm lucky to pull 8 hours. Couple times this week I only managed like 4 hours. That barely covers the cost of gas.

Enjoy not having as many responsibilities as a kid, but also learn to work hard and lower your standards. Adults will always find a way to disappoint you, even as an adult. Grow a thick skin to take the crap tossed your way without feeling bad, but also learn to throw it back. Usually it's done as fun, some take it too far, others are too soft to take it. Also do not be surprised if your boss will never admit they are wrong, yet can still miraculously keep their job.

i will kaeep this on mind as i grow older. on another note, i got a big 2 cyl wisonsin for free it looks like its missing carb intake manifold and some shrouds.

Those things are beasts! Low rpm but high torque.

yup, thats what i gathered

I’m the same way. Good for you!

should i make a thread for my trike build i feel its pointless. its not complicated and its just a simple 8 horse swap on a ct200u-ex and a live axle with mounts simply bolted in and different forks

sound kina cool id like to see your results

So the other day Mechwarrior 5 came out as a physical disc finally for Xbox and PS. Went to two different Walmarts near me, neither had them in store or on the shelf. Kind of irritating, especially since I'm very much against download only games due to consumer rights and all that.

Said screw it and ordered it from Amazon. Should be here in the 17th. Went to a Walmart by my work today, according to their stuff, it wouldn't be in stores until November 30th. Talked to some people, it's in stores in SoCal. So no idea what's going on. It might not he everyone's cup of tea.

The difference between this game and traditional Japanese mecha is, western mecha, the mechs are more like walking tanks. Slow, deliberate, actually feel like a 100 ton war machine. Japanese mecha, more like a figure skater, doesn't usually have much weight behind it.

The Mechwarrior games are based off of the Battletech tabletop. Which fun fact, came out before Warhammer 40,000, and the tabletop game was and is much more popular than Warhammer. 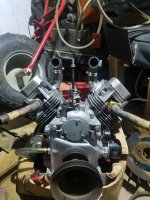 I was given a half converted briggs 25hp intek vert shaft to horz conversion i need ideas to make the oil pump function so ill make a thread.

My small town has a council who really are just plain stupid theres a few people who are okay in there including the town marshal and utilities workers but the main council needs done away with. Im sick of their garbage and since i live in Murica' ive got my first admendment FREEDOM OF PRESS! Ill stretch my admendments if need be, i plan to put a new sd card in my phone ive got several extras that need formatted, and ive got a tripod mount for my phone, and i know editing software etc i will setup Town Of Roachdale NEWS. because ill record the monthy town meeting and share it to residents of nearby towns and this town so they can see the garbage these idiots put out LOL. Said town council members are running this town into the ground and repairing things that arent broken and neglecting the broken things? And treating towns people like garbage.
Last edited: Nov 18, 2021
D