I have already done BLDC conversions & builds on 2 Minibikes,, & understand of have more rolling resistance with 2 more wheels on a kart ect.,, & also used that in my figures.

The way it's looking now, my Kart AUW should be less than 110lbs.

...still cheaper than a boat!

Functional Artist said:
IMO it's gonna be difficult to "hit" 35MPH with a 48V system
Click to expand...

Being that it is going to be a street cruiser, I knew it would be best to lower the king pin/spindle's pretty much as far down as the would go in the yokes, for best road clearance.

As I was mostly an auto tech my whole working life,, I acquired ''a lot'' of cool little parts & hardware over the ''many'' years...…

I found these choice little ''urethane'' automotive sway bar link bushings in one of my ''many'' selector drawers.

I cut off the flange collars of them with an X-acto - ''hobby'' balsa saw,, which works great on this stuff.

The collars will also be used later for spacers on something else.

They fit about perfect with milling the faces of them, just ''enough'' to slip in a ''thin'' stainless washer between the top bearing & bushing,, & the bottom bearing & yoke.

Another couple of bonuses with these bushings are,,

They will aid in a wee bit of dampening.

They don't weigh ''Jack squat'',, unlike the bazillion stacks of washers. LOL 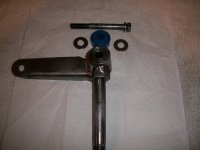 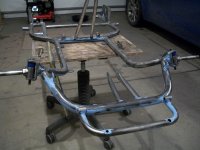 Been busy refurbishing parts on my Buddy ''Fred's'' Margay.
I made the alum. Master cyl. lid by hand. 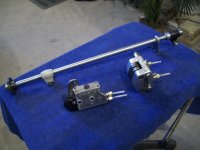 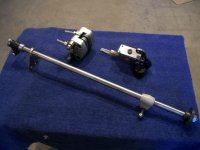 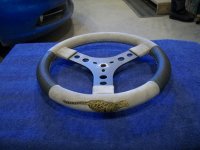 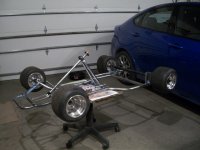 Sure does look a whole lot nicer than my race kart! Also, funny to note, you post a lot like Kevin (Functional Artist). Seriously, when I read through this I almost thought it was him, you type the same way!

JTSpeedDemon said:
Sure does look a whole lot nicer than my race kart! Also, funny to note, you post a lot like Kevin (Functional Artist). Seriously, when I read through this I almost thought it was him, you type the same way!


Might see parts tomorrow,, & also hope to get some paint on my frame yet this week.

...still cheaper than a boat!

It looks pretty fast already. Are you sure you need the rest of the parts?

EpsilonZero said:
It looks pretty fast already. Are you sure you need the rest of the parts?
Click to expand...

Got my first base/ primer coat on the other day.

Already have it dressed, contoured - sanded down,, & ready for the 2nd coat. 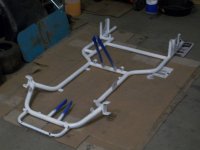 Cleaned & reworked the seat post mounts, & cut down & profiled the seat to my liking.
''Took well over a lb. of weight out of the seat.''
I then did a temporary mock up placement of the seat & hardware.
Figure I better do that before laying more paint down on the frame.

Also plan on painting the seat with matt black, or semi gloss ..

I also cut down & modified the motor mount, for clearance ect. from the right side seat post assy. 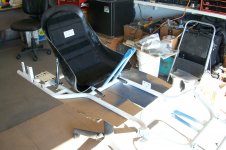 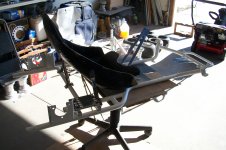 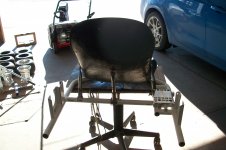 Made some progress …
Went & picked up some new hardware, & bolted a few things together.
Cut & dressed off 2 1/2 inches per side of the axel.
It's now 35''.
Also made the right cassette hanger/axel support brace out of aluminum.
Bottom's also painted with left over blue,, just gott'a find a decent day to paint the rest with the really cool color. 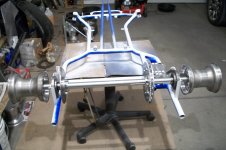 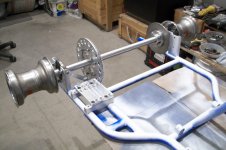 My Grant steering wheel arrived the other day from E - bay & it was pretty jacked up.
Foam rubber seams were not finished, & had a bunch of excess ect.
I also ordered silver spokes, & they sent me black.
They refunded my money & let me keep the wheel,, so I ground off the paint, trimmed & dressed the foam rubber,, & spiffed the spokes up.
Also,, there was no holes in it, just the 3 long gated slots.
I ''hand drilled'' & finished the center hole plus the 6 spoke holes.
Think it turned out pretty pimp, plus it's a bit lighter now. 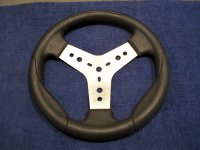 Budget GoKart said:
good deal on the wheel i wanna build a frame one day but i dont have materials to do it yet something i learnd from a retired racer is he filed every other tooth from the sprocket for less rolling resistence and drilled the center out of every bolt
Click to expand...

It does add up though,, if you do enough of it.

Here's a good one,,
Porsche used to actually even drill holes in their ignition keys on like the vintage Le Mans - 917K's. ''LOL''.

One other trick is to use grade 3 hardware ''nut's & bolts'' ect.,, rather than say, grade 8 stuff.
the grade 3 is lighter, & if it's not used on stress points ect.,, it will be just fine.
I' am pretty much using that on my Kart, except for king pin bolts & tie rod hardware.
Don't want to skimp on the steering. 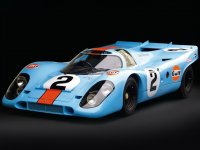 Haha yeah skip tooth sprockets aren’t uncommon on race karts, WMS makes some under the Tuck and Run product line. I might attempt some sneaky stuff like that on the Green Monster but I’ll have to be careful not to destroy sprockets...... cuz ahhh the engines probably gonna be a 15 HP 10K RPM monster....... shoot that was supposed to be a secret...... I guess you guys’ll find out soon enough what I’m talking about with my next YouTube video