Functional Artist said:
* I mounted my battery charger on the wall next to where I park the bike for quick/easy charging
Click to expand...

What model Battery Charger is that? and will it keep the voltage low so you don't over charge the batteries?

Is it this guy: https://www.amazon.com/Charger-Lithium-Motorcycle-Anderson-Connector/dp/B07C9BTB4G

The charger that I have been using is a Yewi UY-600, with the top charge voltage factory set to 49.8V

If interested, there's more info about it further back in the thread.

My buddy got himself a Harley & we been ridin' a bit
...& so, I noticed that I have just put 1,000 miles on 'er since converting 'er to electric

yup, she's just a city "cruiser"
&
My chain "routing seems ta be workin' fine
...& I still do not hardly notice any "wear" on my sprockets 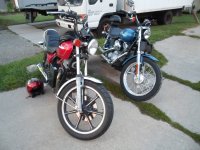 I did a quick video to document the occasion

One of the ingenious features that I incorporated, into the design of this bike, was to use an idler with the same size shaft, as the motor
...so, I can easily interchange the (2) different size sprockets without having to "mess" with the size of the chain

The idler has a 13 tooth sprocket

By doing this, my top speed should increase

* The only "issue" I encountered was, putting a larger diameter sprocket on the motor made the chain "ride higher"
...& as such, the chain was rubbing on the chain guard

So, I had ta do some adjustin'

Yup, I did a video, ta document the progress 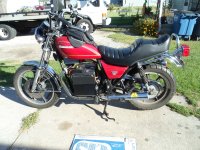 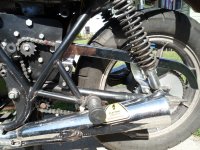 I've had my ElMoto out for a couple of rides so far this spring
...but, when I went ta take 'er for a ride last Wednesday, she would not "turn on"

So, I did some checking around 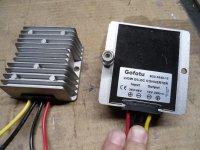 I added some plug ends
...& dated 'er (for future reference) 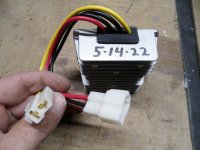 Swapped (technical term) 'er out
...added some orange wire covers to protect & designate that they are 48V
...& also, to differentiate them from the 12V wires (black covering)
Then, tidied up the plugs/wiring a bit 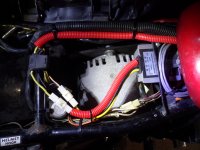 Yup, everything seems ta work
...& were "back in business" (technical term)