This went way up in price for a while. I got called a Richard on FB for posting this when I seen somebody selling theirs for $300.

$207 with free shipping is the cheapest I’ve seen for a while. This is 300cc per revolution. The 500cc is more commonly available and usually cheaper.

I’ve been eyeing those since I found out they exist.
D

Have I got a project for one of those!

No idea on the amount of HP it would consume. But a 1:1 ratio would theoretically make 27 pounds of boost on a 212. So I’m guessing it would most likely be underdriven. If underdriven 2 :1 so the crank spins twice for each rotation of the blower’s pulley, then it should be 6 lbs of boost on a 212. If underdriven so the blower pulley spins twice for every 3 crank revolutions, it should theoretically make 13 lbs of boost.

I actually bought an AMR300 blower a few days ago. It was 212.50 with free shipping, so not too bad in terms of price. The AMR500 blowers are less expensive, but for go-kart engine purposes are probably too large. I have a predator 212cc I am in the process of building as well as a 170cc 4 valve SOHC engine on a Honda Grom that I am considering using it with. This is something I have wanted to do for a long time and I finally pulled the trigger on it. I can upload photos of the blower and the project as it shapes up. I've been through a number of past threads, mostly DIYGK.com threads, on forced induction and I've come to the conclusion that even if it isn't cost effective or easy, I just gotta try doing it for myself. The blower is supposed to arrive in late July, in a week or so, so I should have it before too long. I don't know of any completed attempts to use an AMR300 to supercharge one of our small engines, but there are a few running turbocharged engines out there, so I would have to imagine it's possible. I think I'm going to go simple on the outset with a high idle to keep the engine from bogging due to inlet vacuum and try to run about a half an atmosphere of boost. Again, I'm not looking for massive horsepower numbers or huge boost, just looking to build a cool supercharged engine and learn a thing or two in the process. If it doesn't work, oh well, but if it does I imagine it'd be a lot of fun. Cheers.

G'me sumthin to write on

What are the dimensions of these things?

With some welding, just curious, would it be possible to change it to chain drive instead of belt drive?
Just wonderin'.
W

I found a picture on Google Images that has two of the dimensions. It is 17.5cm wide and 10.5cm tall. In imperial that's roughly 7in wide and 4-1/4 in tall. The plastic intake and outlet pieces on the top and bottom probably add around 2 inches to the total height judging by the picture. I will post pictures once I receive it with a comparison to a 212cc clone or something. As to the drive setup, I imagine you could use a chain drive. The blower will turn at least a few thousand RPM, though, so I would use a durable chain and sprockets and have a good tensioner setup. I think using a chain drive would probably the logical step if you are using chains on the rest of the bike, but it will likely be noisy, and will ruin the cool forced induction noises. I am probably going to use a belt due to the lower noise and so that I won't have to change the stock drive setup too much. I will almost certainly need to change pulleys, but I think that'll be much easier than reconfiguring the entire drive. If the belt's the right size, slip shouldn't be a problem. I will probably end up adding some sort of tensioner to make sure I don't have slip and that the belt doesn't come flying off halfway through a run.

On a side note, I also have some experience with that VZ21 turbocharger that gets brought up every so often on the internet. I bought the cheapest one I could find on eBay for ~$150, and I put it on a small diesel engine. It works pretty well, since the diesel is 635cc but runs at low RPM. I haven't had any problems with the turbo and I considered it instead of a supercharger, but there are a few videos and numerous threads on it online and I figured it really wouldn't be worth it working with the added needs of a turbocharger on such a small engine. Given the flow and size of the supercharger, as well as its relative simplicity, I thought it would be a better option for forced induction. There's also the benefit that the boost production on a roots blower is much more linear than that of a centrifugal compressor like those used on centrifugal superchargers and turbochargers. This, I hope, will lead to easier tuning with the carburetor. I also considered fuel injection, perhaps using aftermarket parts for a Honda Grom or a similarly sized fuel injected motorcycle, but after doing research and thinking about the cost and complexity, I have decided to go the old fashioned route and rely on the Venturi effect. The issues with the roots blower are mostly going to be at low RPM, I think. Here, the imperfect seal of the rotors against the case, combined with the fact that each rotor only has two lobes (high-quality automotive superchargers often have more) will create lower efficiency at low RPM. When this factor is coupled with the low power output of the engine at low RPM and the fact that the vehicle has to launch from a dead stop while propelling itself as well as effectively dragging the supercharger, there may be an issue of power output. At low RPM, the blower will probably create more engine vacuum, so a bypass may be necessary as others on this forum have brought up. I would like to avoid this if possible, but I have a rough idea of what I would do if it wouldn't otherwise work. 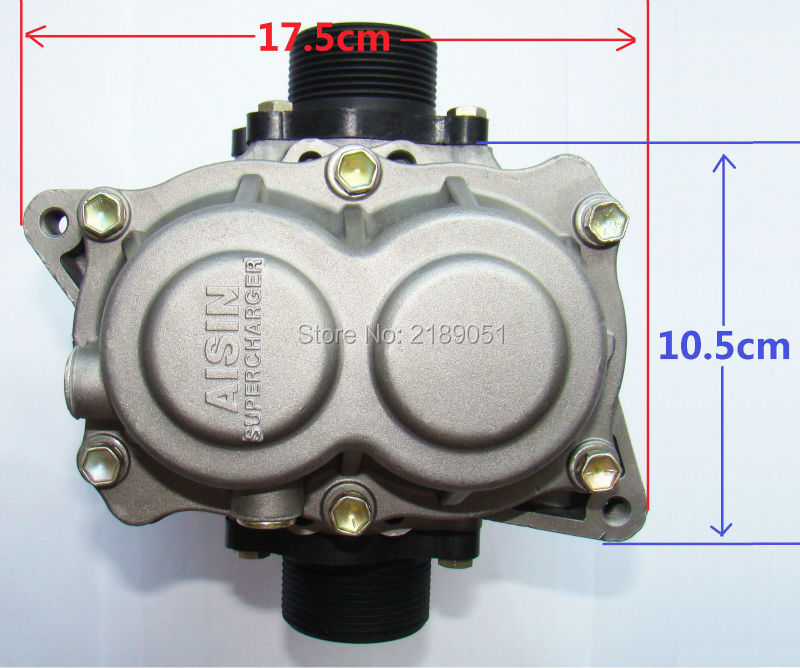 Works for me
W

Here's another picture with a size comparison between a 355mL soda can, the VZ21 turbocharger and the AISIN AMR300 blower. Overall, not too bad. And here's a picture of a setup I assume to be a 125cc chinese engine with an AMR300. This setup isn't even that space efficient, so I imagine the total frame space used could be reduced with different mounting.

I got the supercharger in the mail today. Seems of decent quality. Unboxed the thing and got hit with a wave of gasoline smell. It was totally dry and it didn't seem like there had been gas on it, but it absolutely reeked. It was in a plastic bag and packed in sheets of foam, so it seemed well protected during transit. I looked inside at the rotors and they seemed fine, but I imagine it's hard to tell from the outside if they actually seal well. They had to ship it without gear oil, so I will add some 80W-90 when I intend to use it. I'm pretty happy with it for the price, but it remains to be seen how well it actually works. The other thing I noticed immediately is that it is heavy. It weighed in at around 9 lbs 8 oz, which is not to be trifled with. It really is pretty small in person, but it would add significant weight to whatever it was put on. It comes with a v-belt pulley attached. I'm not sure the dimensions of the belt it's supposed to accept, but it seemed pretty small, like the size of a push mower's drive belt. I spun it by hand a little and got the faintest breeze out one end, but there's a lot of weight to move around in the drive system. Seems like it will end up taking a bit of power at idle to spin, but it also doesn't have oil in the gear case, so adding it may help with the resistance. I'm excited to try getting it hooked up to something, and curious to see if anyone else has gotten/will get one and what they plan on doing with it. There has been a lot of theorizing but I'm not sure who has actually run one and with what degree of success. The setup here is gonna be crucial so I'm gonna think more on how to do this.

Backfire with belt drive and the belt slips.
What happens with a backfire and a chain driven draw through supercharger?
Does it blow up?
W

I'm not sure that all a backfire would do is stall or slow the rotors on the blower. I would imagine it could blow open hoses leading out of the supercharger and it could also cause a huge spike in pressure leading to the bowl and, if one is used, fuel pressure regulator, as these systems have pressure lines from downstream of the supercharger. I'm not totally sure what would happen if a backfire occurred between the intake valves and the supercharger, but I cannot imagine it would be good. If at low RPM, the inefficiency of the blower and it's lack of momentum would potentially allow enough slippage past the rotors and deceleration of the rotors that minimal damage would occur. If at higher RPM, however, the blower will have much less slip and the rotors will have quite a bit of inertia. If a backfire occured at high RPM, I doubt the hot gas from the premature combustion would have anywhere to go, and it could potentially blow the system apart. I would imagine the blower would be ok but the intake system would probably suffer damage. If the "explosion" ended up trying to go out the blower and slamming up against the rotors, they could potentially be slowed, in which case a belt drive would be preferable, as slippage would allow greater dissipation of inertia, whereas a chain drive would rather immediately take up the deceleration of the rotors, while the crankshaft continued spinning at whatever RPM it was at. This might snap the chain or strain the gearing in the supercharger, which one would be wise to avoid. I would go with a belt vs a chain given the potential for a backfire, as it may at least help prevent the blower from being damaged.

Any updates on your installation?

It depends on the volume, pressure, and compressor efficiency. 30cfm is about 20hp worth of air and at 15psi it would require at least 1.5hp from the crank. In other words, the engine makes 20hp and you get 18.5 of it to go fast with.

Pushing 30cfm through a 212 at 7500rpm would need about a 2.63:1 underdrive regardless of how much boost that creates.

I think 10-12psi would be a more realistic maximum for the AMR300. 15psi is going to be at the very upper limit of (or beyond) its capability. Since roots blowers are not extraordinarily efficient, the discharge air is going to be very hot. Assuming an efficiency of 50%, it will be nearing 350°F. Assuming a very generous 65% will still put the temp at about 290°F.